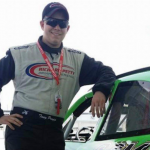 Tony’s interest in racing started when he was very young. He used to spend as much time as he could at the racetrack with his family when he was young in North Idaho. Tony’s father was in the military so moving around the country was a normal part of life which kept him away from the racetrack. In 2001, Tony moved to Las Vegas and one of the first stops he made was Las Vegas Motor Speedway. he developed a relationship with multiple race teams including the Richard Petty Driving Experience. before he knew it, he was driving race cars around the country. Tony became a driving instructor and ride driver for the RPDE and spent every weekend at the Bullring with super late models, legends and modifieds. In 2014, Tony decided to hang the race suit up to become a police officer for the Las Vegas Metropolitan Police Department where he is an officer today.