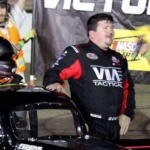 I started racing karts at the age of 5 (1985).  Raced Karts until the age of 16 where I started racing dirt factory stocks at Manzanita and Canyon Raceways in Phoenix, AZ.  After graduating High School I joined the United States Air Force where I served my country for 10 years which moved me away from my family where I started racing Motocross and RC Cars as well as legend cars in Alaska. My military career took me out east where I started racing NASCAR Late Models at famous tracks such as Hickory Motor Speedway. My wife then received orders to move us out west where I separated from the military and became the Head Driving Instructor at the Richard Petty Driving Experience at Las Vegas Motor Speedway and for the entire Western Region. I then competed as a Rookie at the Las Vegas Motor Speedway Bullring winning rookie of the year and 3rd in points for the 2015 Season.  After leaving the Richard Petty Driving Experience I started my own driving course over seas in Abu Dhabi teaching Precision and performance driving along with a tactical perspective for two years before accepting a position at SpeedVegas where I am now one of the Lead coaches riding right seat in exotic cars such as Ferrari’s and Lamborghini’s just to name a few.  During this time I racked up 3 legend car main event wins in 6 races where I finished 2nd, Fourth and fifth in the other three starts.